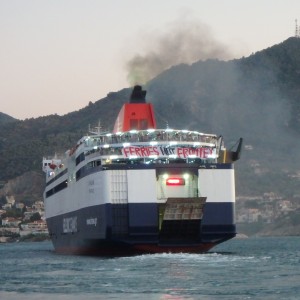 “The border regime broke down on a broad level. Do we face a historical new situation on the fight for freedom of movement? Or is it just a short summer of migration?…” These sentences came from a new initiative supporting the migration through the Balkan (see below), and in deed the situation became critical by the last weeks and days.
The 22 August 2015 marks a new highlight: in the Central Mediterranean 4400 boat people have been saved – a new record day, while thousands of people land in the Aegean on the Greek islands. Among them are more and more woman, children, old and sick people, see for it the moving report below. On the same day refugees and migrants stop the attempt to lock the Macedonian border militarily: They attack the barb wires so the Military draw off. Only two days later another sensation: the German Federal Office for Migration and Refugees (BAMF) made public that the Dublin procedure is suspended “effectively as far as possible” for Syrian refugees. It’s quasi a capitulation because of the persistence of the persons affected, basicly a sign for the growing unenforceability of “Dublin” And another big success of the social movement of migration.

At the same time we know about all the dead and seriously injured persons on this way. Either drowned in the sea or stifled in trucks: the EU border and visa regime forces to use dangerous routes and kills people, again and again. This happens because refugees and migrants can’t use ferries or trains (like in Hungary) see http://www.migszol.com/blog/let-them-board-the-trains
The responsible persons in ministries and bureaucracy, in Budapest but primarily in Berlin should be brought to justice, some day. But this will only happen if the “short summer of migration” stays not alone and that we stop the discrimination into “good and bad” refugee. We also should try to prevent them to stigmatize the commercial escape aid as the cause of the problem (although it’s the consequence of their own policy) and that they start with military strike against the trafficker structures.
For more than 30 years now the EU border regime formed up with more and more money, more control, more FRONTEX. Simultaneously the fortress Europe is in the defensive, the walls are overrun and undercut like never before. At the moment things seems to be possible, also that the fight against the inner and outer borders will get more dynamic.

We can contribute to this especially because there are so much escalation and polarisation. The first is to not give space for Pegida and Nazis. The racist mob, which act in Heidenau, Salzhemmendorf and other places, should fail to dominate the immigration debate. The other thing we can do is to support the self organizing processes of the affected people and to emphasize the right of freedom of movement in the countless support and welcome initiatives.

“Just open the borders” a researcher of migration appeals in the last edition of the magazine “Stern”. In the beginning of August the new campaign starts which supports civil disobedience: “Do escape aid” (in German “Werde Fluchthelfer.in”). In the Central Mediterranean the everlasting slogan is “Ferries not FRONTEX”. Those are three examples which show how to destroy fortress Europe. Detailed description of each below. One sentences of the report to Lesvos summarize it very well: “Every evening we sung and danced with new people, because this border cannot be kept and everything is in movement.”

All the best,
the Kompass-AntiRa-Team