is a silent process. In contrast to the panic, the crying, shouting of the threating death the last moment of life on the sea is that silent that you dont hear anythting but swell … “ Thats how the disturbing–impressive speech of Mely Kiyak begins which she hold on the 19th of September concering the award of the Taz Panter Price to the Watch The Med Alarmphone.(http://taz.de/Laudatio-von-Mely-Kiyak/!161089/)
Without long political explanations the laudation becomes to a harsh accusation and also to a current one. More than 50 people – women, men, children – have drowned within the last two weeks, only in the Aegean Sea. As a “silent process”, which one wants to scream into the faces of the responsibles ones in Brussels and Berlin.

Dear friends,
In Edirne/Turkey thousands of asylum seekers protested in the last weeks for a flight route overland. They called for a march to the EU-borderline to Greece because they didnt want to risk the dying on sea any longer. The turkish government reacted as a watchdog: Refugees were not allowed anymore to leave their place of registration and to use busses. They were pushed back and supporters criminalised. Many have to take again the route via the sea in direction Lesbos and other greek islands, risking their lives if they want to reach Europe. 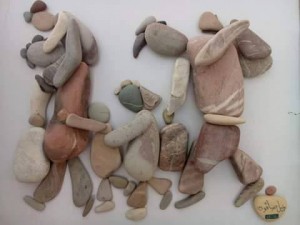 But once they made these way over the sea for most of them the way then to Germany or even Sweden is possible within 10 or 20 days. Because the balcan route has been fighted free in the last weeks. No government from Macedonia, Serbia, Croatioa, Hungary, Austria and Germany dare to stop them. The fear of new mass protests give these refugee movements an enourmos power so that between Croatioa and Serbia is practised a huge flight help deal over the green border.

Budapest, the”March of Hope”, on the 4th of September is still in memory, it marked a new peak in the struggle for freedom of movement. Thousands were on their way by feet when they were re 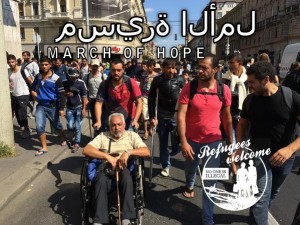 fused to the trains. “Inspired by that there was a boost of Refugee Welcome Initiatives, linked with a huge medial attention which was not only in Germany and Austria mostly positive for the refugees. Regarding all the ‘ambivalences of hegemony’ – from paternalism or the discourse of usefullness inclusive the distinction into good and bad refugees – we see an increased potential for a transnational anti-racist movement which will flank successfully the ‘summer of migration’ ”, formulates the network transact in a current text. “Keep open the flight routes” is demanded and at the same time there are two more central challenges: The adressing of the flight reasons and the development of comprehensively social fights:
“How does it go on in Europe and in Germany? Will the ruling ones be successful in the containment of the great refugees struggles? Do they make a pact if necessary with right-populist and racist parties and organisations? Succeeds a social division on the bottom?
Or is it possible that the impulse of autonomies and fights of migrations overlaps into other social questions in Europe? May the marches of hope make courage and start another dynamic of social fights in Europe? Freedom, dignity, democracy, social security for themselves and their children … Thats what the people on their flight protest for and they dont get stopped by fences and borders. They want to arrive at the place of their choice, mostly at their relatives and friends all over Europe, learn the language, living good, work, live. “Solidarity for all”, the slogan of emancipatory networks in Greece, is to be picked up to struggle against the attempts of division and to fight at the same time the “normality of austerity”, the politics of social cuttings and precariousness. Payable flats for all through new housing programms, acces for all to health service and education, basic income and increased minimum wage: these social demands can and must be filled with new life, through social appropriation and social strikes, local to transnational. The successful fights of refugees and migrants push the social question again on the agenda. Lets take it, tear down the borders, in all countries, in all heads!”

And so we wish you energetically weeks!
Your Kompass-Team

P.S.: The official motto of 3rd of October, germans “day of unity”, is “overcoming borders”! It was and is pure mockery concerning the deadly policies of ecxlusion for which Germany stands for centuries. But now the slogan fits because every day the slogan is practised by thousands of people who actually should be ecxluded …

P.P.S.: We are very happy that also cheap airlines get into the solidarity
http://ryanfair.org/