“… Meanwhile an autonomy of migration has evolved, partly as a consequence and continuation of the Arabellion. The new assertiveness of migrants, and the strength with which they enforce their freedom of movement, their right to move, will no be easily crushed by the EU and its policy of fending off migrants….If the Fortress Europe is to be defended, it cannot be achieved peacefully anymore. 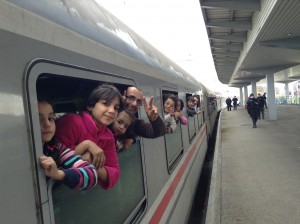 Europe is at crossroads: Are hundreds of thousands at the external borders to be condemned to die, to be detained in camps or even to be shot at? … Europe will change, but it must not fall back into the old patterns of deportation, detention and repression. Instead, Europe could open up and allow a process of re-orientation and pluralisation which would be be fitting of the 21st century. … 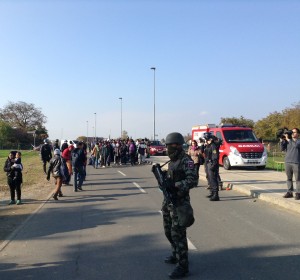 Will all those people that have welcomed migrants enthusiastically be able to withstand the increasing attacks from the political right and the blowbacks that the next months will inevitably bring? Can we communicate that austerity and precarity goes hand in glove with competition and racist division? And will we be able to develop processes of solidarity and common struggles? Are we ready and willing to not merely ‘integrate’ migrants, but to allow and foster more drastic changes that will also re-align our own lives?…”

http://moving-europe.org is the name of the co-operation project which, with practical emphasis on the Balkan (see below), was initiated at the end of October and with these few lines try to find a political assessment.
And yes, the situation is and will remain contradictory and open.
On the one hand: the right and the racists sense a new opportunity and mobilize, no longer only in Dresden. Simultaneously the EU Governments – and also “Mama Merkel”- step up the control regime at all levels. Accelerated asylum laws, announcement of fast-track proceedings and mass deportations, of deprivation of rights and registration zones: there is no lack of ‘clear 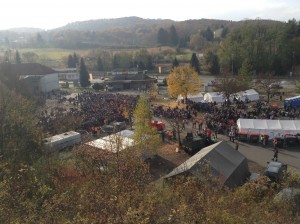 terms’ expressing the racist public authority. Reluctant improvements in residence law of recent years are being abolished again with one stroke of the pen.
On the other hand: the rulers know that most of their right-wing populism only feigns legal competence and will remain deterrence rhetoric. The announcement for instance that Afghan asylum seekers will be mass-deported, will not be enforceable, but also rumours can and do make people insecure.
The social movement of migration is and will remain unstoppable though. The institutionalised corridor of trains from Serbia to Austria and then on to Germany is not a favour, but has been set up in reaction to the big flights being unstoppable. “The EU Commission is expecting the arrival of a further three million refugees in Europe until 2017” (5.11.15). This sounds as if 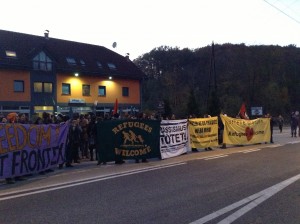 fences and the military offer no alternatives and that – at least until now – a majority of the rulers wish to avoid the dissemination of ‘Orbánism’. They know that it would mean the irreversible end of the European promise of freedom.
Besides, the support for refugees from civil society remains perseveringly strong along the entire route: Sea Watch is currently starting sea rescue operations on Lesvos, in the Balkan dozens of local and transnational projects are operative, many on-the-spot welcoming initiatives are becoming permanent, the support chain reaches up to Scandinavia (see http://live.w2eu.info/ ).
In the previous Newsletter we already emphasized it: for the coming months the challenge and outlook are in the development of coordinated, common social struggles. This means the development of a solidarity with the new citizens, which demands the same social and political rights for all. Or as aptly expressed in the closing sentence of the mission statement of the abovementioned project: “In this way we want to contribute to keep open a path into a new Europe – for those that are arriving as well as for ourselves.”

In solidarity,
The Kompass Crew