“Anything is possible, strong social movements can change everything. That’s what we learned once again, through the experiences of our Alarmphone project and in an incredible year of successful struggles for freedom of movement”. These are the first sentences of the introduction to the brochure ‘Moving on – One Year Alarmphone’ (see below), which documents the impressive stories and developments from the entire Mediterranean of this truly historical year. 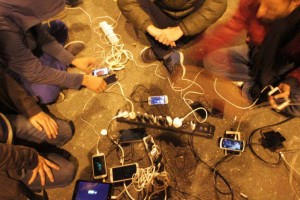 In 2015 the external borders of Fortress Europe were more than ever being demolished, at first the massive crossings of the Aegean extended into breakthroughs along the Balkan Route, followed by corridors into the very centres of the EU. Along the entire route ‘Welcome’ initiatives were spontaneously established and later on evolved into permanent support structures. To be sure: in September the ‘long summer of migration’ reached its dynamic zenith and now is increasingly being confronted by ‘a winter of reaction’. But even in mid-December the numbers of arrivals in the Aegean are comparatively high, with thousands of people still moving every day through the (controlled) corridor to the north. The most recent struggles at the Greek-Macedonian border moreover show (see below), that the Balkan Route remains a hard-won space. It is far from clear how things will develop there in the forthcoming weeks and then in the spring of 2016, when in all probability the numbers of refugees will start increasing again…

We mentioned it in our last two issues as the main challenge and are therefore more than delighted that in many places the necessity of a ‘Beyond Welcome’ is increasingly being elaborated; that at conferences and in seminars the discussions and first practical activities focus on how to develop common social struggles that go beyond the ‘Welcome’ initiatives. An example is the heading ‘Frankfurt for All – Solidarity City’ of a statement from Rhine-Main concerning the International Day of Human Rights (see below). 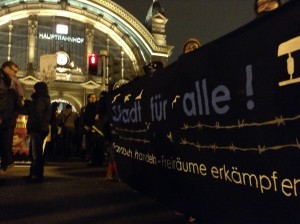 The squatting of a house on the same day for the Shelter Project in Frankfurt may at first have failed, but then in Göttingen and later also in Cologne the self-organised appropriation of housing could be maintained (see below).

In early February Blockupy invites people to a conference in Berlin at which, among other things, the possibilities for a socio-political offensive will be investigated jointly with the new citizens. And when these initiatives increase in dynamism, the ambitious call for an action day ‘towards a transnational social strike’ on 1 March 2016 might be well-timed: “We call up all ‘precarity’ workers, migrants and refugees, activists, autonomous groups and unions to turn 1 March 2016 into a day of decentralised and coordinated actions and strikes, by disturbing the regular production and reproduction procedures, by creating an exchange between different labour realities and by making the often hidden conditions of exploitation visible, as well as by attacking the border regime and those institutions that are responsible for this management of mobility and precarity” (see below).
In this sense we already wish you all a very good start of the new year.

In solidarity,
the Kompass team